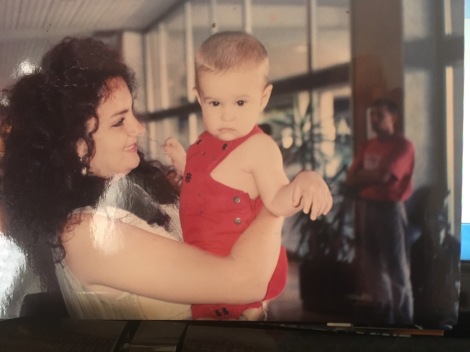 This is me being very flamboyant in 1995, it was taken in an airport in Spain. This image represents genesis. I am the same human being today that I was when this picture was taken, I’ve got the same genes, the same eyes, arms and legs. However, I have changed immensely in the past 22 years. I’ve learned to speak two languages, walk, write, and a few other things. Someone who knows me today would be able to tell that it is me in this picture, mostly with the aid of a handful of features that have changed little in the past two decades.

The fluidity of humans and the way in which we constantly change as time passes is very similar to the way religion changes throughout the centuries. Some religions haven’t changed much, and others are almost unrecognizable when compared to their original form. Although things inevitably change as time elapses, certain core features remain static. Like every religion, I will one day die a completely different person than the one I was when I came into this world, and I will give way to another unique human being.