The Bible itself, in John 8:32, mentions, as so, 32 Then you will know the truth, and the truth will set you free.” In so many ways the word of God is meant to bring freedom, and it consist of setting the soul, mind and body free from bondage of anything that can harm it. Through this context and the life of Martin Luther, I was able to see how the examples of these words, come to life. And advocate of the truth, in which he confines, the truth to be real and simple. The Roman Catholic Church was a benediction of power, and through  it as we see in Martin they were able to rule and exercise power onto the people through bondage. There was a particular negative reaction to Luther’s  clumsiness because, a priest was set to be an example of perfection, and because not all things worked perfectly, he was seen as imperfect and therefore unholy. These same truth were the truth that later on the movie, reflect Martin’s actions as true christian. That being imperfect, and being loved is the true power of the word of God. Luther’s visit to Rome indicated that he was moving towards the Axis Mundi. The priest were thinking of building a second church and therefore relocating the Axis Mundi. Relics and Indulgences, were meant to keep the church alive, feed the monks and cover the necessary need of the people “serving God”. These relics also became a problem because they caused, for extortion of the word of God. As seen in the movie, when people were paying for there loved ones salvation or forgiveness of sin. The first order symbols can lead to corruption because they’re only interpret by priest and not in context or left to interpretation by the common people.  As seen also in the movie, where the Bible was only written in context that the priest could read, and not the common people of Germany. A scene from the movie that explains the communitas, function of ritual is exemplified, when Martin is sent off as priest. He sees the need for the truth of the revelation of the word of God, and he sees that through relics and  superstitions, people were drawing more away from him then towards him. As is the burial of the child that committed suicide, committing sin before god by not being able to be seen as holy enough to buried with the rest.

The idea of Luther’s proposition, seen through the salvation outside the Church but none through Christ was a scary thought for the church because that meant that the church would lose all power over the people. And if there was salvation outside of the church there was no need for the physical embodiment of the church.  Luther’s 95 Thesis was known as his way of exposing the ugly side of the Catholic Church. He was exposing them for all the deeds that lead them to sin, and parted them more from the ways of God.  A universal leader must be perfect in love in order to lead. The Pope as a man, can do things in error, and to give all power to anyone is let alone dangerous, more so it will be to give him the power to decide right from wrong according to his own context. Luther’s German Interpretation, was dangerous to the church, because it meant that they were not longer needed as interpreters and they themselves ( common people) would see the truth for themselves about the word of God.

Consequences of Luther’s interpretation brought war and division. It caused the people to expose and want to eliminate the Catholic Roman Doctrine.  Sacraments in Luther’s context were seen as relevantly important, because they inclined, a re-birth ( baptism), and they led themselves through the word of God but the church at the current time used such sacraments as a way of manipulating power into those whom they favored, and called them ” favored by God” as the young prince in the story.  Luther did reformation, did tear the world apart just any other religious leader before his time. As any leader he brought change, in a place where changed was needed. This movie is a great example of how anyone can cause change as long as they stand for what they believe in. 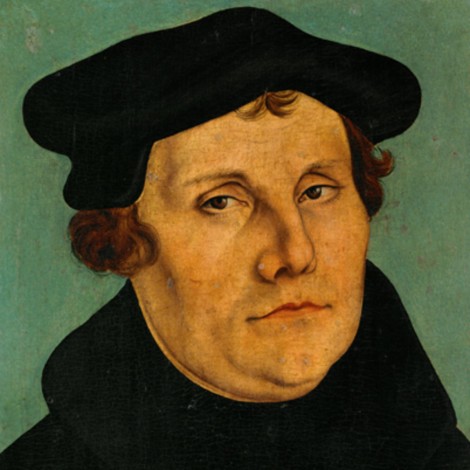 I have held many things in my hands, and I have lost them all; but whatever I have placed in God’s hands, that I still possess. – Martin Luther